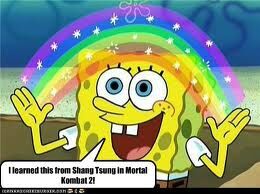 Mortal Kombat was a game that was supposed to be about seven people battering Callum Owen and an old man. It was created in 1992, though it's been suggested by several magazine's that it's set a few years before. It was based upon Street Fighter.

It's newest release is Mortal Kombat: Crappy McCrapCrap. Mortal Kombat: Crappy McCrapCrap (Or, MK:CMCC for short) has sold over three million copies worldwide, and is still encounting so they can get more workaholic's to be fat geeks like the guys at Crap Inc. It sucks so badly because of Midway's death, and when W.B. took over and remade it, thus ruining the once good MK saga. It ended with MK: Armageddon, yet W.B. still didn't understand that when ARMAGEDDON'S NAME proves that it should be the last one.

Mortal Kombat has created many games, twelve in total. Here is the list of them all:

Mortal Kombat (Well what else was I going to say?)

Mortal Kombat II (Also, what else was I going to say?)

Mortal Kombat Trilogy (All the above Mortal Kombat's, in one game! Sadly, Motaro is unplayable. Which makes it as krap as Crappy McCrapCrap. However, you CAN play him as a secret character... which has saved Midway's ass from total annihaila... ann... a... forget it, death)

Mortal Kombat Mythologies: Sub Zero (Apparently they were supposed to make a bunch of MKM's, but they never got round to it so now there's only one)

Mortal Kombat GOLD (The same one as above, only this time you can find Gold Ore, along with Iron Ore, Copper Ore and Cent-Ore)

Mortal Kombat: Deadly Alliance (What happens when you put an evil sorcerer, an old man who has somehow turned 30, a giant monstrousity from hell, and a human with skin cancer wearing a green mask in a microwave)

Mortal Kombat: Deception (When Onaga comes home and his mum asks him whether or not he went to collect the six kamidogu, since he wasn't supposed to)

Mortal Kombat: Armaggedon (Well, it looks like SOMEBODY upsetted the Elder Gods! Anyway, you can play as any character in the MK saga in this game. Except for Steve... okay then, you can play as Steve)

Mortal Kombat VS. DCU (Wait... how's that possible? Why would a group of fearsome ninja's wage a war between a bunch of fake superheroes?)

Mortal Kombat: Crappy McCrapCrap (As mentioned up above, this is the WEIRDEST of all the games. I can't explain it in words, that's how weird it is)

Go figure that out yourself, I'm too exhausted after thinking up of witty lines for the games above me.

That's quite a mouthful... anyway, there has been a bunch of television adaptions for Mortal Kombat. Here is the list.

Mortal Kombat The Movie (Yeah, you got everyone from MK1 fighting eachover. Not to mention that Kitana was in it, although she's from MK2)

Mortal Kombat: Anni... WHAT I SAID EARLIER (The best of all the movies. A sequel to the above movie. Why is it so epic you ask? Because Motaro is in it. Sadly, he's killed in it as well R.I.P Motaro)

Mortal Kombat: Legacy (I have no idea what the heck THIS is. All I know is that this is a film and it's the sequel to the above film)

Mortal Kombat: Defenders of the Realm (A Saturday morning TV show, which is for kids... yup... for kids, and it kills people in it...)

Mortal Kombat: Rebirth (Another Film... only it's animated... never watched it? Believe me, you don't WANT to watch it...)

Mortal Kombat The Wombat (A bunch of comics)

R.I.P.
Mortal Kombat
1991-2010
Died from corporate greediness, when Midway's
care for MK was gone,
MK was left with no parent,
and thus was given to W.B.
W.B. abused and exposed it, killing MK.
It died of neglect.
And also of bad diareha.

Community content is available under CC-BY-SA unless otherwise noted.
Advertisement